Tattoos are a popular way for men to express themselves and show off their personal style. Thigh tattoos, in particular, can be a bold and masculine choice, as they offer plenty of space for intricate designs. Men’s thigh tattoos can range from small, discreet symbols to large, elaborate pieces that cover the entire thigh. They can be placed on the front or back of the thigh, and can be visible when wearing shorts or swimwear.

In this article, we have compiled a list of 30 thigh tattoo ideas for men to inspire your next ink. From traditional symbols to modern abstract art, these designs are sure to make a statement and reflect your unique personality. Whether you want a tattoo that symbolizes your passion or a design that simply looks cool, there is something for everyone on this list. Read on to discover the top thigh tattoo ideas for men.

You can go for a deer tattoo to represent your connection with nature or the outdoors, or to remind yourself that you’re strong and resilient like a deer. Plus, it looks super cool on the thigh!

A tree of life represents eternal life and rebirth in many cultures. It is also known as the world tree, which can be seen as a symbol for the universe or even for evolution itself. Go and get this meaningful tattoo to shine.

Are you ready to spread your wings and fly? You will symbolize your free spirit with a bird tattoo. Also, a bird flying away from you represents your desire to be free from constraints and restrictions in your life!

If you have an obsession with dinosaurs and are looking to show that off with a permanent ink job, then this is your chance. Get this scary dinosaur to feel its power all the time.

Inspired by Led Zeppelin’s Swan Song logo, this thigh tattoo will make you stand out while showing your love of Led Zeppelin’s songs. Give it a shot to this iconic image.

Are you a fan of Pearl Jam which is a rock band from USA? If so, why not getting a tattoo of its logo? In this tattoo, there is a childish sketch of a man’s figure with his hands up.

Floral tattoos are common on the thighs because they’re easy to cover up. Mostly women get this tattoo but who says that men cannot get them? A man who gets a floral tattoo may be looking to express those things in himself: his inner beauty and romance.

For one thing, this is a unique design that’s going to get people talking! The sheep skull may symbolize rebirth or animal sacrifice while the snake can represent transformation, which is used in religious iconography.

Aren’t elephants amazing animals? Being one of the largest animals, an elephant has a long history of being revered for its wisdom. If you want to feel stronger, you need to get this black ink elephant tattoo.

The moth is a creature that changes its form and appearance over time, and that can also be seen as a symbol of change. If you want to symbolize the cycle of life and death with a perfect tattoo, this is the one you should go for.

Wanna a reminder of your own personal history and the journey you’ve taken to get to where you are today? Get this birth date tattoo on your thigh then.

Are you a sea lover? If so, an anchor tattoo might be a great idea for you. It is a classic symbol that has been used to represent hope, safety and stability.

Father and son tattoos are a sign of love, respect and loyalty between father and son. If you want to get one of them, it can be as simple as the one above.

Wolves are known for their hunting prowess, and so a wolf thigh tattoo might represent the owner’s desire to be strong and powerful like a wolf. This wolf tattoo with a rose below it will help you show your powerful side.

Owls are known for their wisdom and they can be a great ally for anyone who’s looking for guidance. Dream catchers are used to catch bad dreams, so why not combining these two in one tattoo?

A Maori tattoo is not just a decoration because it carries deep meaning for the wearer. You can get it to express yourself or your ancestry, as well as to honor your family members who have died.

This artistic tattoo that shows a man coming out of the thigh will make your body stand out. If you like this type of tattoos, you should definitely give this tattoo a shot.

18. Quote Tattoo on Thigh
The person with a tattoo like this feels like he’s been betrayed by so many people that he feels like it’s impossible to trust anyone. Plus, the snake biting a hand is a great symbol for that.

Animals like this tiger above are depicted in myth, legend, and stories especially India, Tibet, Japan, Thailand etc. It was common for temples and places of worship to have tigers, lions and similar majestic animal totems and statues to protect the entrances.

Owls are often associated with magic and the occult, so when you see one on the head in a tattoo, it may be a sign of a special power. If you think you have one, why don’t you try it out?

An ornamented moon tattoo means that you’re looking for something that’s beautiful and simple, but also a little mysterious. Go for it if you wanna shine with a moon.

It represents the power of men to overcome adversity and be victorious. While the three-headed snake has a dual meaning: it can represent the past, present, and future, as well as the three aspects of a man’s personality which are mind, body, and spirit.

This tattoo is a symbol of strength, agility and cunning. It represents an animal that can survive in the wild and thrive on its own, so this kind of tattoo implies that the wearer is also strong, agile and cunning.

The Jedi Master from Star Wars has become an iconic symbol for everyone, so if you like it, go and get it to tell the world that you’re a proud nerd.

A snake tattoo may be a sign of protection from harm. Being the most feared animal in the world and having a reputation for being vengeful, the snake represents how man should be: powerful and strong.

Butterflies are adorable animals, aren’t they? A butterfly is a symbol of the soul because it can fly to wherever it wants, so two butterflies on thighs represent two should who were once part of one being, but got split apart.

The Vikings were great and fierce warriors. They set sail from their homeland and went other countries to attack the enemy. To commemorate them, why don’t you get a tattoo of them?

Being a smart animal, an octopus is known as an ancient symbol of protection. This line tattoo will give you the energy of strength and resilience as it is what an octopus tattoo symbolize. What are you waiting for to get it?

Sometimes two contrasting things are great to combine. So, why not creating a combo of a skeleton and flower? The flower represents life and beauty while the skeleton represents death and decay.

A tattoo like the one above is typically thought to represent a family’s history, or even their future. It is also a way to show your pride in your heritage and your commitment to preserving it.

A skull tattoo is taken to a whole different level here! The shading effects, roses and flowers make this skull adorable. The meaning behind this particular design is that roses grow from the earth and bloom into beautiful flowers, despite being surrounded by death and decay.

In Buddhism, a monk thigh tattoo is a symbol of enlightenment. It’s also a symbol of the Buddha himself, who is often represented as having one of these tattoos on leg.

The thigh is a popular area to get tattooed, but it’s not always easy to find a good design that suits your style. We hope that the ideas above will help you make a decision. Which one is your favorite? Let us know in the comments!

30+ Neck Tattoos for Women: Ideas and Inspiration for Your Next Ink 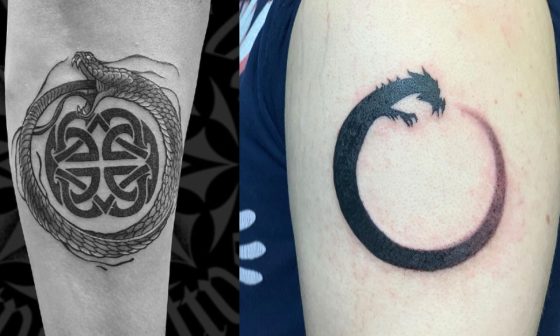 Read More
CCollections
Thinking of your new and extravagant tattoo? Not too sure what to go for? If you’re open to… 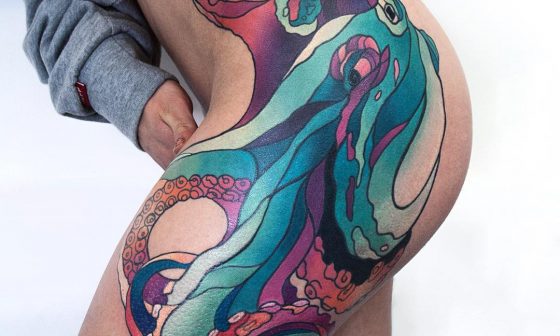 Read More
CCollections
When you walk into a tattoo parlor you won’t be shocked to see one octopus lining the walls.… 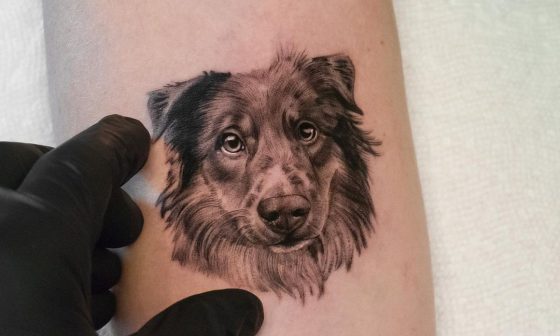 Read More
CCollections
People getting their furry one tattooed on them has become increasingly popular. Dog parents use it as a… 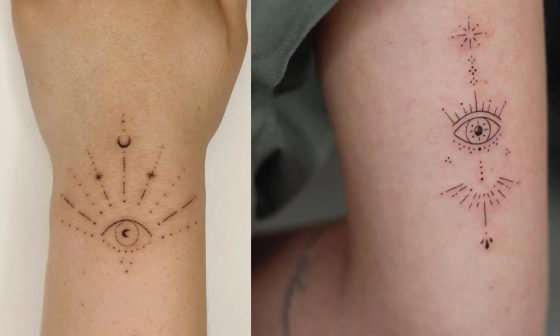 Read More
CCollections
Evil eye tattoos seem like something that you like? If you’re a fan of supernatural concepts and want… Read More
CCollections
St. Jude, also known as San Judas, is one of the most beloved and revered saints in the…
🎉New Year, New Ink! See our top picks for January 2023✨
👉 View Gallery