The Queen of Spades is a popular symbol in tattoo art, often chosen by those who are drawn to its powerful and enduring meanings. The queen of spades is often associated with femininity and strength, representing the qualities of a powerful and determined woman. Those who choose to get a queen of spades tattoo often do so as a tribute to the fierce and independent spirit within themselves or a loved one.

If you want to get a Queen of Spades tattoo, we are here to help you decide which one to get. Let’s get started!

1. Queen of Spades with Flowers Tattoo

This tattoo means that you are a queen and the flowers represent your beauty to the fullest.

The Queen of Spades is the first card in a deck, so it’s a symbol of beginnings. Let’s get this meaningful tattoo with your sister to remind yourselves that there are always new beginnings.

3. Queen of Spades Tattoo on Back

This tattoo on the back means that you are a strong, independent and intelligent woman. You also have a great sense of humor!

Here is a great tattoo choice if you want to make a statement. This cool retro woman with sunglasses will be your queen of spades.

Are you a courageous and independent woman? If you get this tattoo, it means you have a complete control over your life and you know what you want.

The Queen of Spades symbol tattoo is a sign of luck, prosperity, and good health. Why don’t you go and get it?

Want to have a unique tattoo? Then, let’s change your queen in your queen of spades tattoo. A beautiful black lady will make you feel like a true queen.

8. Ace and Queen of Spades Tattoo

The Ace of Spades is a card that generally represents a new beginning or something that’s been started while the Queen of Spades is associated with fertility and vitality.

9. Queen of Spades with a Rose Tattoo

Queen of spades tattoo represents a woman who is ready to face her fears. The rose shows her soft side and helps her to remember that she needs to take care of herself.

10. Side Rib Queen of Spades Tattoo

Side rib tattoos are one of the sexiest ones! Get this tattoo as a reminder to stay true to yourself, and not let anyone else’s opinions get in the way of who you are.

11. Queen of Spades Tattoo on Wrist

This wrist tattoo can be used to show love for the game, or to simply display the player’s favorite design.

Traditional tattoos are amazing with their color palettes and designs. The queen above will make you feel the power of traditional queens.

When someone gets this tattoo on their inner bicep, it means they are very aware of the risks they take and don’t mind taking them.

In addition to its meaning as a card and as a woman, Queen of Spades also represents strength and intelligence.

If you’re looking for a tattoo that will get people talking, this is a great choice! Sleeve Queen of Spades tattoo sounds like a great idea.

The Queen of Spades is a card in the deck that represents the feminine energy, which is often associated with love and compassion.

18. Queen of Spades Tattoo on Finger

The Red Queen of Spades tattoo on your finger is a symbol of your strength and power. Give it a shot to look amazing.

19. Detailed Queen of Spades Tattoo on Back

A giant Queen of Spades tattoo is waiting for you to make your back shine! At the top, a beautiful queen is shown and her skeleton and dark side is shown at the bottom.

Those who love classic things will adore this Queen of Spades tattoo. All you need to do is to find a good tattoo artist for it.

Here is a popular Queen of Spades tattoo choice for tattoo enthusiasts. The spade itself is typically depicted as a stylized heart, and the Queen of Spades symbolizes strength and power.

The blonde sexy queen means that you are a strong, independent woman who knows what she wants and isn’t afraid to get it.

24. Queen of Spades Tattoo on Leg

Love wins, right? These two queens love each other and they make everyone know that love is love.

25. Queen of Spades Tattoo on Hand

The Queen of Spades is a symbol of strength and power. The sword is a symbol of righteousness, and together they create a powerful combination of the strength to protect and the power to do so.

The faceless Queen of Spades tattoo may mean that you have no idea who you are, and that you don’t know how to find out.

Wanna have a super sexy and evil-like queen for your Queen of Spades tattoo? If your answer is yes and you want to stand out from the crowd, go for the one above.

A witchy queen of spades tattoo usually means that you want to make sure you’re the boss of your own life. Let’s go and get it.

29. Back of Arm Queen of Spaces Tattoo

Back of arm is one of the most preferred parts of the body when it comes to getting a tattoo. Give it a shot to this queen.

Want to get a tattoo that symbolizes luck and prosperity? With a cool tattoo like the one above, you are sure to have luck in your life.

Are you a master of playing the game? If you want to have a tattoo that shows your great talent in playing it, go for a traditional tattoo design.

Let’s make a combo with a Joker and Queen of Spades. The Queen Spades card represents loyalty, while the Joker represents fun and laughter.

This beautiful, strong and confident queen will be a reminder that you are the ruler of your own destiny.

The queen of spades tattoo is a great choice for those who want to express their love or admiration for someone. It can also serve as a reminder that they are not alone in their struggle to find success and happiness in life. 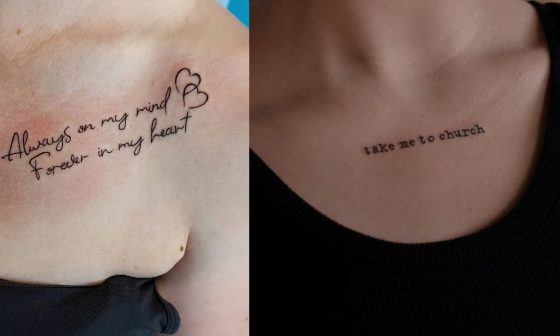 Read More
CCollections
Inscribed tattoos over chest are some of the most gorgeous tattoos and popular tattoos for men. These are… Read More
CCollections
Skeleton hand tattoos are a great way to express your love of the macabre. This tattoo design is… Read More
CCollections
New Year’s resolutions often include starting fresh and reinventing ourselves, and what better way to do that than… 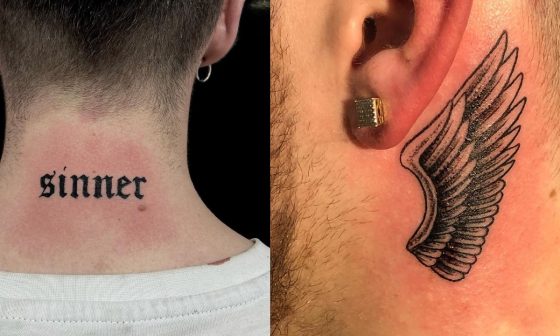 Read More
CCollections
Neck tattoos for men can range and differ when it comes to their size, color and meaning. Are… Read More
CCollections
Rib tattoos are a great way to make a bold statement with your ink. The ribcage provides a… Read More
CCollections
Whether you’re a fan of the cheerful, bright flowers or are going for something more exotic and mystical,…
🎉New Year, New Ink! See our top picks for January 2023✨
👉 View Gallery