A father and son tattoo is basically a tattoo design that has the image of both father and son or a man who has his own son or his father’s photo as part of its design. The best thing about these tattoos is that they look very unique because they express the bond between father and son. Plus, you can have them on various parts of your body but if you want to make sure that it looks good, then it would be better to choose some place where it will not be too big or too small for anyone looking at them.

There are many different reasons why people would want such kind of design on their bodies but one of them should always be because there is something special between them and their fathers which cannot be expressed in any other way except through getting such kind of permanent mark on your body, so everyone knows about how close you are with your loved one.

If you are ready, scroll down to see one of the best father and son tattoos! Let’s get started.

Here is a great design that symbolizes the bond between a father and son. It can also be used to represent how much the two care for each other, or how much they’ve grown together.

2. Father and Son in Bottle Design

A father and son in bottle design is a unique way to display your love for your dad. Let’s show the man who means the world to you with it.

The lines connecting the two are symbolic of their connection, as well as their ability to communicate with each other. If you like minimalist tattoos, this one is for you.

Holding hands is a simple, but meaningful symbol of love and affection. For a father and son, it’s all the more powerful.

This tattoo can be used as a way to symbolize the father/son bond as well as mark the time spent together.

Are you a Dragonball Z lover? Goku is known as an extremely powerful warrior. Baby Gohan, on the other hand, is a young version of Goku and is also one of his sons.

Do you want a tattoo which symbolizes that you are a very close family? This black father and son tattoo is a sign that you love each other very much and will always be there for each other.

8. Father and Son with a Clock Tattoo Design

Your father is always there for his son, even though he may not always be physically present. The clock can represent how time flies, as well as how both are getting older and even pass away.

Do you remember the days when you were a child and you watched a sunset with your father? If you can’t forget that moment, let’s get this image inked on your body!

Go for a line father and son tattoo if detailed and outstanding tattoos are not your cup of tea. The father holds the shoulder of his son and shows his love above.

Did your father inspire you to use a motorcycle? This tattoo also shows that the father wants his son to keep riding motorcycles, even though it can be dangerous.

Get a tattoo of you holding your baby son in your hands to appreciate the bond between you and him forever. Let’s go and get it!

Do you remember how great you felt when your baby son held your hand for the first time? Get a tattoo of this emotional and powerful moment on your body.

Here is a great tattoo idea for those who want to get a tattoo that will always make them smile. If you have a picture of your father and you, get it inked on your body with a line art design.

15. Father and Son with a Rose Tattoo

A rose tattoo can represent many different things, but in this case it’s a symbol of love and protection between father and his son.

16. Father and Son with Date Tattoo

If you’re getting this tattoo, it means that you want to commemorate the date when your father or your son passed away. He may not be here physically but he will always be on your body!

Here is a symbol of the relationship between father and son. It can also be a way for someone to show their support for cycling or an interest in biking as a sport.

Are you and your son a baseball lover? If your answer is yes, here is a great self portrait and vivid colored tattoo for you. This tattoo will remind you the days when you went to the baseball training.

This tattoo can be a way of showing gratitude for the care and guidance provided by your father. The way it is created by using dots that are grouped together is amazing, too.

A watercolor splash tattoo design looks like it was painted with watercolors. It’s very colorful, and the shading is done with multiple shades of each color.

A father and son in sports uniforms tattoo can be used as a way to commemorate a special moment or just as an expression of their love for each other and the team the support.

The polar bear represents strength, courage and loyalty. The tattoo is a reminder that you will always be there for each other in good times and bad.

24. Father and Son in Leaf Tattoo

One of the most popular pastime activities of a father and son is definitely going fishing. Get a tattoo of this moment on your arm in a creative way.

A hugging father and son tattoo is a symbol of love and protection. The son is embraced by his father, and the father is protecting his son.

The father and son are sitting and maybe talking about life. Your father is your guide and the one who always give advice.

Those who love Star Wars films and want to get a father and son tattoo will go crazy right now! Get the tattoo above to depict the bond between two of you.

Little boys become interested in football with their father’s influence. The son in the tattoo is wearing a uniform and he holds his father’s hand. If you experienced that moment before, go and get this tattoo.

This black ink father and son tattoo is ready to shine on your arm and show everyone that you have a great bond between each other.

This twin tattoo is a great way to celebrate the fact that you both have something in common, which is the love of each other!

31. Father and Son on Sleeve Tattoo

The father is the one who protects his son and makes sure he knows how to be safe in the world. The nature in this tattoo also symbolizes that the father also teaches him how to survive in nature.

32. Father and Son with Scenery Tattoo

Om is the symbol of God in Hinduism, and it is a sign of diligence, strength and focus. If you are getting this tattoo with your father, it means that you have a strong relationship with him and that you respect him.

33. Father and Son in Hourglass Tattoo

It is an inevitable fact that time flies and you miss the days you spent with your father as a little child. This hourglass tattoo will symbolize it.

Which one is your favorite? We’re looking forward to your comments! 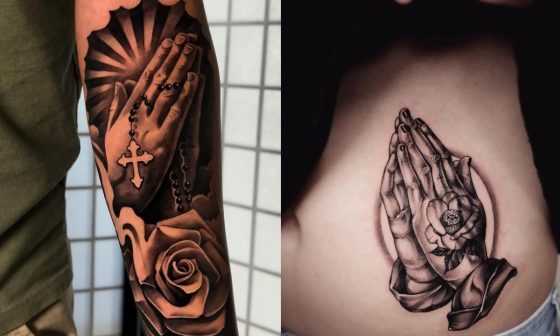 Read More
CCollections
If you’re looking for a tattoo design that represents your religious beliefs, then praying hand tattoos are the… 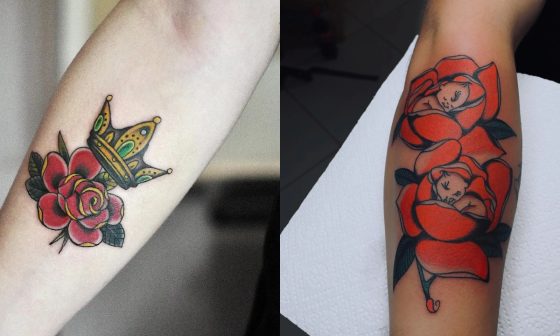 Read More
CCollections
Rose tattoos aren’t only tattoos for women, as one might think. Nowadays, everyone can go for this cool… Read More
CCollections
Whether you’re a fan of the cheerful, bright flowers or are going for something more exotic and mystical,… Read More
CCollections
If you’re a person who believes in astrology, then you may be ready to get a tattoo of… 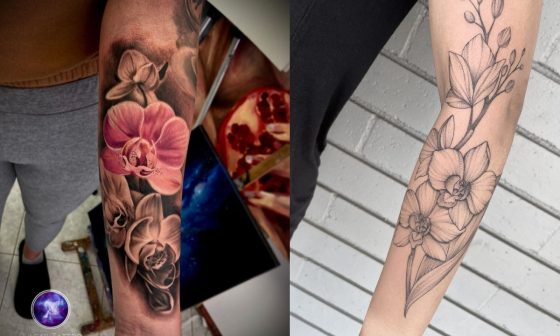 Read More
CCollections
If your birthday is in December, your birth flower is the narcissus. The narcissus is a Greek word…
🎉New Year, New Ink! See our top picks for January 2023✨
👉 View Gallery