30+ Berserk Tattoos: A Visual Tribute to the Dark Fantasy World of Berserk

The Berserk anime and manga series follows the story of Guts, a mercenary warrior seeking revenge against his former best friend and comrade, Griffith, who becomes a powerful demon after sacrificing their comrades to become a God Hand, powerful demigods. The story is set in a medieval Europe-inspired dark fantasy world, and is known for its graphic violence, sexual content, and dark themes. Many people may choose to get a Berserk tattoo as a way to show their love for the series and its complex characters, as well as the impact it has had on them. Additionally, the series is known for its intricate and detailed artwork, making the tattoo designs visually striking.

In addition to Guts’ journey for revenge, the series also delves into deeper themes such as the question of humanity’s will to power, the struggle for survival in a cruel and unforgiving world, and the corrupting influence of ambition and desire. The series is also known for its exploration of the human psyche and the darker aspects of the human condition. The characters are complex and multi-dimensional, and their journeys and struggles are often relatable to the readers and viewers.

This complexity and depth of the series make it a popular choice for tattoos. Many fans choose to get tattoos of their favorite characters, such as Guts or Griffith, as a way to show their connection to the series and its themes. Others may choose specific symbols or imagery from the series, such as the Brand of Sacrifice, as a way to represent their personal struggles and triumphs. Overall, Berserk has a loyal fanbase, and many fans choose to get tattoos as a way to show their love and appreciation for the series.

A stripe tattoo can be a statement of rebellion or individuality, a way of showing support for something, so let’s get it inked on your body with Berserk.

Guts is known for his strength and determination, as well as his fierce and relentless fighting style. You may symbolize these traits with a cool tattoo of him like the one above.

Having a full arm tattoo of Guts may symbolize your admiration for the character and his traits. Give it a shot to this sleeve tattoo.

Are you a lover of the anime series Berserk? If your answer yes, go and get this fun tattoo to show Guts’ determination to survive despite the overwhelming challenges.

It is time to be savage! Guts is armored and ready to fight in this tattoo, so you can symbolize your own fierce determination and willingness to fight for what you believe in with it.

The dotwork style of tattooing requires patience and attention to detail much like Guts’ own journey throughout the series. All you need to do is to find a talented tattoo artist.

A horizontal tattoo of Guts that is placed on the arm shows how powerful he is. His eyes symbolize his intense, fiery gaze and his fierce determination to overcome adversity.

Guts is a skilled warrior who is driven by a fierce desire for revenge against those who did wrong him in the past. Let’s get a tattoo of him in the war to cover your back with a strong image.

If you are willing to do whatever it takes to achieve your goals, even if it means resorting to underhanded or unethical tactics, go for this shady Berserk tattoo.

In Berserk, those designated for the Invocation of Doom, a sacrifice ceremony in which participants transcend humanity, are marked with the Brand of Sacrifice.

The muscular body of the Berserk character contributes to his strong and fierce personality. To show your inner strength and ferocity, there is no better tattoo than this one.

Get a tattoo of Guts to show how much you love this great character and place it inside a frame to give it a nice look.

If you want Guts to remind you that you are always here to fight, why don’t you get a tattoo of him with a sword? You are sure to stand out with this tattoo.

When you decide to get the face tattoo, it means that you are a  great fan of the anime series, which was created by Kentaro Miura.

This traditional tattoo means “rage,” and it’s used as a symbol of strength, courage and passion since the character is screaming.

If you are looking for a way to show off your personality and interests without having to wear something all the time, go for a Berserk tattoo.

18. Naruto vs Guts Tattoo on Back

Guts has never been cute like this! If you want to have fun with your Berserk tattoo, getting a funny cartoon tattoo of Guts can be a nice idea.

You will feel Guts’ warrior side to the fullest. This tattoo also shows that you’re not afraid to get blood on your hands if it means protecting those who mean the most to you.

The berserk tattoo above is just a way of saying that you’re wild and free since he looks super wild with a blood on his face.

Those who want to have a cool Berserk tattoo should definitely consider getting this one above. The color combo of black and pink has a dark and edgy side to it.

In this tattoo, an old style of tattooing and modern techniques are combined! Warrior Guts and his sharp look will remind you to fight for what you believe in.

Cover your beautiful arm with an armband tattoo that will show everyone that you are a true Berserk anime lover!

The design features a cat’s face, but with a pair of shoes and a mouth full of sharp teeth as well as a shield. If you love cats, go for it.

The use of color in the tattoo really brings the character to life and adds an extra level of depth to the tattoo. What are you waiting for to get it?

The use of shading and texture gives the tattoo a sense of depth and realism that is sure to be admired by anyone who sees it. Let’s show your appreciation for Guts!

The power of red color is super strong just like Guts. Remind yourself of the importance of having bravery, even when things are difficult or scary with this sleeve tattoo.

Continue the trend of getting the main character Guts tattooed and don’t let this beautiful work be forgotten! Plus, red Berserk symbol provides a great look.

This Berserk tattoo is the perfect way to get your adrenaline pumping since the main character looks super scary by opening his mouth wide.

Wanna have a symbol of power and strength on your body? This tattoo is typically used to signify that the bearer will defend themselves with force or violence if they have to.

The tattoo above means “beast” or “wild.” The word berserk was originally used to describe warriors who were known for their ferocity and lack of control during battle.

Guts is a skilled warrior and swordsman, driven by a powerful desire for revenge against his former comrades and he is physically strong. With your tattoo, you can make him look more stronger with these tooth details around his face.

Berserk tattoos are an excellent way for fans of the series to show their love and appreciation for the iconic characters and themes of the manga and anime. Whether it’s a portrait of Guts, an intricate depiction of Casca, or an image of the series’ logo, Berserk tattoos are powerful and striking works of art that are sure to be admired by anyone who sees them. Read More
CCollections
Medusa is one of the most iconic creatures in Greek mythology. As you already know the story, she… Read More
CCollections
Dolphin tattoos are a popular choice for many people. They symbolize friendship, love, and loyalty. Their sleek and… 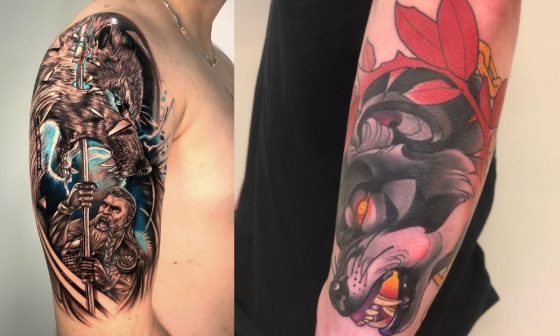 Read More
CCollections
Small tattoos for women are the perfect way to express your individuality in a minimalist way. They’re also…

Read More
CCollections
A father and son tattoo is basically a tattoo design that has the image of both father and…
🎉New Year, New Ink! See our top picks for January 2023✨
👉 View Gallery